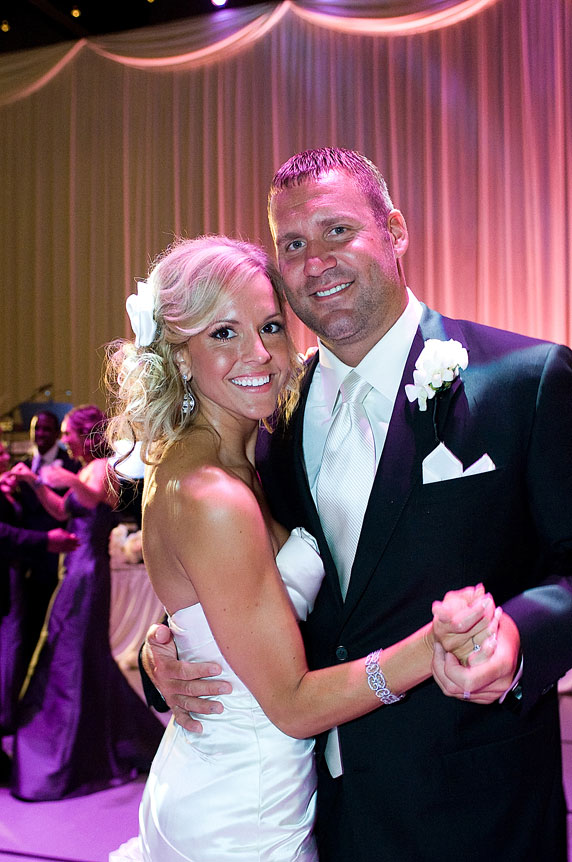 Ben Roethlisberger got another ring on Saturday.

The Steelers’ Super Bowl-winning quarterback married New Castle native Ashley Harlan in a private church ceremony in Ohio Township, then celebrated into the night at a reception Downtown. The affair was coordinated by Sheila Weiner of The Event Group.

Roethlisberger, 29, and Harlan, 26, tied the knot in a ceremony at Christ Church at Grove Farm, then received a police escort to the David L. Lawrence Convention Center for the reception.

In all, there were 20 members of the bridal party — including Steelers players Willie Colon and Brett Keisel and Roethlisberger’s agent, Ryan Tollner — and one flower girl.

The Steelers’ Trai Essex, Ramon Foster, Chris Kemoeatu, Doug Legursky, Maurkice Pouncey and Max Starks were ushers. So were former Steelers running back and ESPN analyst Merril Hoge and state police Trooper Edward Joyner, who has worked as a personal assistant for Roethlisberger.

The couple went to great lengths to keep details of their wedding plans secret — convention center brass posted fliers indicating a movie shoot was taking place from July 18-24 — and their wedding day was no different.

Ohio Township police blocked access to the church for hours before the ceremony, and Pittsburgh police and a private security firm controlled access to the convention center, shutting down 10th Street between Fort Duquesne Boulevard and Penn Avenue for much of the day.

The Roethlisbergers, who could not be reached for comment and did not issue a statement, required guests to present a pink sheet of paper to gain access to the church and reception. Once at the convention center, guests received a gray rubber bracelet and another pink slip regarding the event.

Bomb-sniffing dogs swept the convention center earlier in the day. Lt. Jack Kearney of the Allegheny County Sheriff’s Office, who handles security for the Steelers, was at the reception.

Police and private security officers were scheduled to remain at the convention center until 2 a.m., police said.

The service in the nondenominational church lasted less than an hour. Harlan walked down the aisle with her father, Dave, to “Threads of Love.”

Two tall candles on the altar were lit in memory of family members and loved ones of the bride and groom.

The couple took photographs at the church for about an hour before leaving for the reception with the wedding party in two limousine buses.

Planners expected as many as 650 guests at the reception, and a steady flow of black limousines and sport utility vehicles arrived shortly after the church service.

Cocktails were served on the second floor about two hours before dinner and dancing. The party then moved upstairs to The Spirit of Pittsburgh Ballroom on the third floor.

Those involved said Roethlisberger and Harlan spared no expense.

The ballroom was decorated with scores of roses — mostly different shades of pink, along with white and cream — from Hepatica Florist in Regent Square. Table arrangements also included orchids and hydrangeas.

A grand piano stood on a stage beneath a giant scripted logo of the couple’s initials: A and B on either side of a large R.

Roethlisberger and Harlan chose “God Gave Me You” for their first dance, and the song was performed live by the original artist, Dave Barnes. Harlan danced with her father to “I’ll Always Be Your Baby” by Natalie Grant.

“This was certainly a wonderful event and the most elegant event that I have ever been involved with,” Ballina said. “When we were all finished, you couldn’t tell it was the convention center. It was just so beautiful. The ballroom was gorgeous. It went together so well because all of the vendors worked so well together.”

Guests, seated at about 65 tables of 10, chose between roasted beef tenderloin with cabernet demi-glace or pan-seared halibut with grilled lemons for dinner, provided by The Common Plea Restaurant and Catering, Downtown.

Staff handed out Moet champagne for the toasts, and Chateau St. Jean chardonnay and cabernet was served with dinner.

The couple decided on a six-tier wedding cake from Vanilla Pastry Studio in East Liberty.

The only sign of Steeler Nation came outside the church.

Friends and family of Bill and Margie Zierenberg gathered outside their home down the street from Christ Church in hopes of catching a glimpse of the newly married couple, but it never came.

The Zierenbergs’ granddaughter Lizzy Weisner, 12, who was visiting from Dallas, and her cousin Callie Downing, 14, of Ben Avon joined other cousins to make a sign that read, “Best wishes, Ben and Ashley.”

Ohio Township police Cpl. Donald Manz said there were no complaints or arrests at or near the wedding ceremony.

“With all the things (Roethlisberger) has gone through in the past year,” Manz said, “we anticipated some kind of advocacy group or something, but it was quiet. Maybe the heat kept them away.”