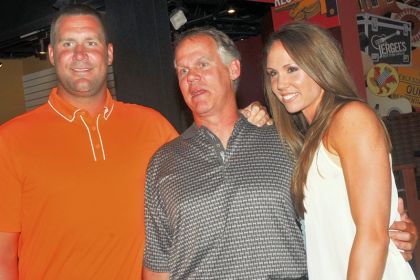 A quarterback and his love for K-9s was the inspiration behind the Ben Roethlisberger Foundation’s annual benefit to support K-9 police and fire units. “Our family has a love for dogs and Ben had that since he was young,” explained Ken Roethlisberger, the father of Steelers’ QB. Ben’s mother, Brenda, and sister Carlee also attended the party June 2. The foundation helps to buy bulletproof vests for the dogs among other things. The second annual fundraiser for the cause was held at Jergel’s Rhythm Grille, Marshall, with music by The American Flyers show band from Atlanta, and a strolling supper. The party for the pups also supported the Make-A-Wish Foundation and was sold out with more than 320 guests. Everyone had a chance to mingle with Ben, his wife, Ashley, and Steelers Heath Miller, Charlie Batch, Maurkice Pouncey, Matt Spaeth, Brett Keisel and others, as well as a chance to bid on live and silent auction items. Not to be outdone by their players, coaches Mike Tomlin, Todd Haley and Kirby Wilson were also there along with GM Kevin Colbert. The foundation has made 107 grants totaling more than $950,000 to 102 police and fire departments and community youth organizations including Make-A-Wish.